I’ve been a Mac owner for 18 years now, and have been using them for 26 years. Although I did a lot of design work on Commodores, Amiga’s, then PC, no computer inspired me to work more than a Mac. The amount of attention poured into every little detail gave me confidence in the machine to do what I needed it to do. Macs encouraged me as a creator. Understanding that talented people who care about what they do created the tools I use to create, inspires me to do better and put as much attention to detail into my own work. This is why I love Macs.

I owe a lot of my Mac heritage to my friend James. His father was a graphic designer back where we grew up, and James, like me was arty and interested in design. James’s house was always full of Macs in the 90’s - his father upgraded frequently (as most computer owners in the 90’s had to) and the previous years models ended up at home. While I was still using an Amiga at my house, at James’s I was using Quick Draw and playing Marathon.

I think over the years, before I got my own Mac, at James’s house we used;

I too followed the graphic design path, partly encouraged by James and his family. After building PCs from 1995-2000, I was going to University to study Graphic Design and was ready to go all in on Mac.

My first Mac was a PowerMac G4 (tower) dual 450mhz, the first of the dual CPU Power Mac’s - something I was incredibly proud of but I’m not sure I ever really benefited from as most apps were not optimised for parallel processing at the time. 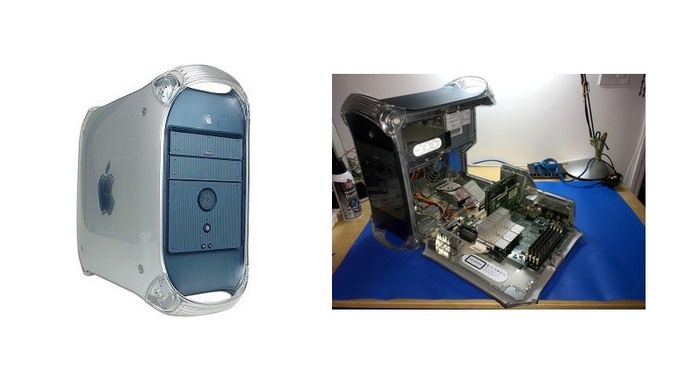 It came with 256mb Ram, a 16mb ATI graphics card, a very slow hard drive around 30gb and a very slow DVD drive (read only). I was over the moon with this machine and it served me well for more than 6 years. Its design was inspiring, the whole motherboard mounted the the side door that opened with the release of a circular handle. It was a work of art compared to the shitty PCs I spent my formative years building and constantly maintaining. Even the chassis was organic looking with four curved handles; front and back, top and bottom. And yet it maintained the versatility of a traditional PC tower. Over the years I replaced everything except the CPU and used an array of external accessories ranging from parallel port zip drives, firewire (400) cd burners and USB (1.0) external hard drives. It launched around the same time as Mac OS 10.0, which was effectively unusable but fun to play with in the early versions.

Diverging from the Mac for a minute, my next Apple purchase was in 2002 - the 2nd gen iPod. I think I loved this thing more than my Mac. 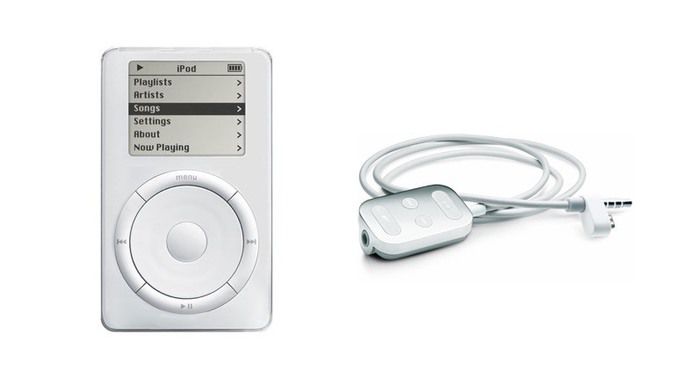 My friend James had the 1st gen model that had a 5gb disk and a spinning wheel interface that physically moved. The model I brought came less than a year later, and bought with it a fixed, touch sensitive wheel and a whopping 20gb drive. It had a tiny monochrome screen, FireWire interface and a bizarre rounded rectangle remote that had a 3.5mm jack with additional chip for the remote controls. You could use it to store and pay music of course, but it also mounted as an external hard drive allowing me to ditch my zip disk and use the iPod to cart my working files to and from uni computers each day. This thing was a tank and as I moved to newer iPod models over the years I continued to use this one as a disk. 8 years later it died after years in service as a backup drive for my friends entire business operation.

The next Mac that I used frequently was in my first job. A downgrade to the machine I’d used 3 years previous; a G3 tower. It was really just a weaker version of my own G4 tower but got the job done, most of the time. I did love the fetching blue colour. Work was weary of the OSX upgrade (rightly so), so we ran OS9 for another year or two more. 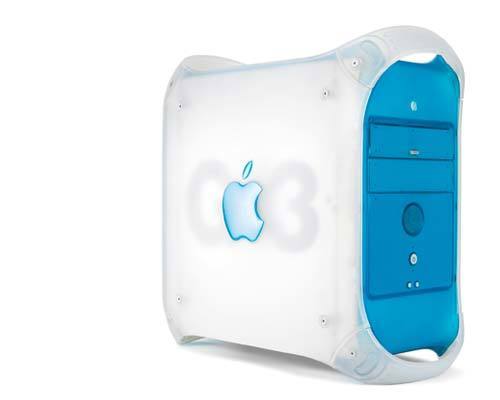 RAM was often the big constraint back then. I remember managing RAM allocation per application in OS9 and having to borrow sticks of RAM from colleagues computers to compete a working file for a deadline.

Work bought PowerMac G5 towers in 2005 for the design team which were the beginning of the all aluminium cheese grater design that lasted all the way to 2012. 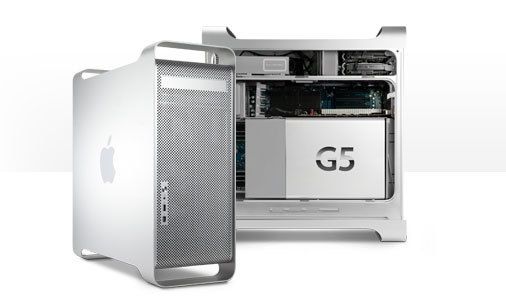 The interior design of the machine was once again a real work of art. The side panel came off completely and I remember this model using a protective clear plastic seal that helped make an air tight tunnel for the air to flow through. The CPU heat sinks were huge - as the PowerPC chips were pushed to their limits to achieve the speeds in the G5 generation (part of what led to the Intel transition). The hard drive bays came with little rails you clipped the disks into allowing easy push-in installation without needing to fiddle with screws or wires. It was enormous, unapologetically industrial and imposing. 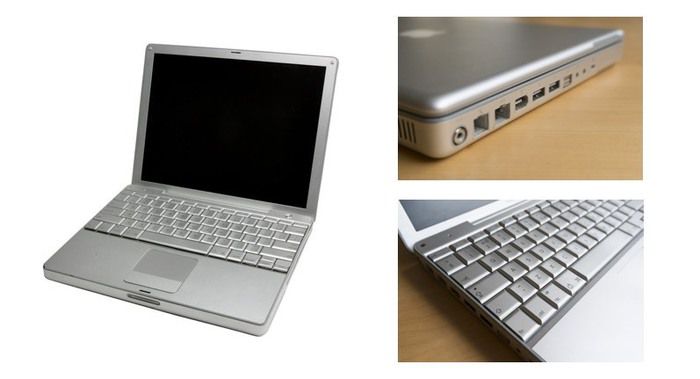 The industrial design on this guy was once again stunning. The keyboard ran right to the edge helping make it the smallest laptop ever made at the time. It was over an inch thick but only weighed around 2kg. Its sheer portability is what won me over. The amount of tech stuffed into this machine was impressive considering it came with an optical drive which must have taken up a third of the internal space and a removable battery another third. I adored this machine and used the hell out of it. When I quit my job to go freelance in 2007 I carried it everyday. Of all the Macs I owned and sold, this is the one I wish I’d kept the most. 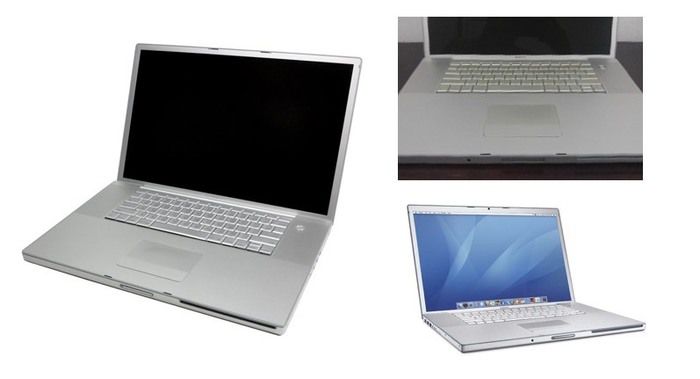 Moving from the 12" the 17" laptop was a massive jump. My logic at the time was my freelance jobs were increasingly with startups who didn’t have computers for me to use or spare monitors to plug in to. I needed to bring a large enough screen to design on with me. Because of its size I tended to leave it at the place of work in the week. Carrying this thing was a workout.

It was an absolute unit weighing in at 3.1kg, and measured 39cm wide, 26.5cm deep and 2.5cm thick (15.4 x 10.4 x 1 inches). The full size keyboard was dwarfed by the body. The backpack I had to carry, including external keyboard, laptop stand and Wacom tablet, made me look like a turtle.

I maxed out the specs, including the higher resolution screen (bumped to 1920x1200 with matte coating). It was a real work horse, chewing up whatever I could throw at it.

This machine served me well for many years. I started my agency using this machine and sold it years later when I transitioned back to desktops as the agency took off and freelancing in remote places came to a halt.

Most of my Mac’s that followed for the next 10 years were iMacs my business bought. We had the thick ones with optical drives to begin with, then the thin ones without, then 5k retina iMacs. They were perfect for the kind of work we did, and as the ones we owned (before switching to leasing) aged out of the business, a few ended up at home.

As a business we owned an old MacBook air for meetings, a MacBook Pro 13" unibody, and a couple of MacBooks (2014 and 2015 models) that my business partner Neil used as his primary machine. He had a long commute and it was perfect for working on the train. In fact the 2015 model was another business leftover that is my machine in my new role. I’ve been using it everyday for over a year and I do love it. It’s so incredibly portable, at a cost of being compromised in a few key areas, but I still love this little machine. Despite it’s lack of impressive specs it handles everything I need on a daily basis with minimal complaints. I only very occasionally run into issues of having only 1 port.

Somewhere along the line I bought a cheese grater Mac Pro for home. I can’t remember exactly how I ended up with this machine, all I remember is I didn’t buy it new, and it was a base spec machine I remember having no end of software issues with. That eventually got sold when the first iMac came home from work, and I was glad to see it go. These machines were widely loved and respected, I think I just got a lemon, however it’s size when living in a small London flat made it less than ideal as a little used home computer.

Today I have one of the left overs after we closed the business; a late 2013, 27” iMac I use infrequently. Most of my home computing is on the iPad these days.

I like the idea of getting a decent Mac mini with a nice external screen. But I can’t justify it. As I mostly use the iPad at home, I will save my money for upgrading that on a regular basis rather than invest in Macs I wont use. The iMac I have is more than sufficient for all my home needs for the time being.

As time marches on I’ve found myself more attracted to the old Macs again. I look back on many of these older machines with incredible fondness. I’ve developed a unhealthy addiction to buying up old Apple keyboards and would love to one day buy a few Macs from the past to build a Stephen Hackett like Mac museum. The Mac’s I covet the most are;

I cant imagine never owning a Mac. I think I’ll always have one around, if I’m lucky and actually build this collection, perhaps I’ll have a dozen or more…

I’ve had the iPhone X for 2.5 years now. During this time, excluding driving where a cable is required to connect to my car stereo, I think I’ve used the lightning port on my phone less than 10 times thanks to wireless charging. I wasn’t... Continue →