Mac upgrade - 7 years in the waiting

Until 2020 I’d not had much of a need for a home Mac. I’ve always had one, but the majority of my home computing needs are met by my iPad and iPhone. But I’ve always had a computer for those few things only a Mac can do, or to work from home in a pinch.

When I was a self-employed contractor (2006-09) my work Mac was also my personal Mac, and in constant use as the abilities of that Mac were intricately linked to my income. I’d been through a lot of Macs over the years, upgrading regularly as the technology improved and my needs evolved. I had desktops first, then moved to Laptops when they went Intel. Once I started my own agency, those needs changed to being desk-bound, laptops only served a purpose for meetings. This was the dawn of the iMac being a competent all-in-one option and so as my business grew we invested mostly in iMacs. From about 2009 onwards I almost exclusively used iMacs at work, at my desk. That continued all the way through my journey as a business owner until we shut the company down in 2018 and sold off most of the machines. My business partner and I kept one each, mine being my daily driver at the time - a maxed out 27 inch late 2013 iMac [1]. This is the Mac I have used at home all this year. I have worked for 9 months for my last employer on that machine this year, but my role was not heavily production focused. Now a few months back into contracting work from home and this old iMac was really starting to slow me down.

Upgrading is expensive and I knew Apple Silicon Macs were a month or so away - I wanted to wait to see how good they were. The reviews turned out to be outstanding so I jumped on board and bought myself a new Mac.

If Apple had released a new M1 iMac, I most definitely would have got that. But this first generation was just the entry-level laptops, and a new low-end Mac mini [2]. I have no need for a laptop as 100% of my personal computer time is desk-bound. I have my iPad for everything else. The Mac mini also has two USB-A ports, in addition to the two USB-4 ports, ethernet and an additional HDMI, so that seemed like my logical choice. I also got myself an LG Ultrafine 5k display to go with it. I figure this gives me the flexibility to upgrade in the future to a newer Mac Mini, or go back to laptop use if that ever makes sense again. If I ever am tempted to go back to a future iMac, then the Mrs can always have this screen for her office.

I’ve been using this machine for a few days now and just spent an afternoon mounting it underneath my desk and doing some tidy cable management, as is customary with a new computer installation. I’m very happy with the setup, and this Mac flies like nothing else I’ve ever used.

A few of the things I’ve really noticed going between these machines:

The screen
The biggest difference for me is the screen. The iMac I was using is pre-retina. It’s the same size - 27”, but it was a 1x screen, not very bright, with a standard sRGB colour space. The LG looks incredible by comparison - full 5k resolution at 218ppi, capable of displaying the P3 wide colour gamut. I have issues with the build, reliability and potential longevity of this screen, but it’s the only retina 5k choice on the market (still!).

The speed
It’s amazing what you can put up with when it’s your only choice. That old iMac was slow! It was great in its day, and maxing out the spec when it was purchased gave it a lot of longevity, but today it really struggles and I had to be very aware of how many things I had open, and be sure to time certain actions well to coincide with breaks away from the desk.

The difference in Geekbench scores are as follows, first numbers are the old iMac / the second numbers the new Mac mini.
Single-core 839 / 1705
Multi-core 2660 / 7378
That’s more than 2x the single-core score and nearly 3x on multicore 🤯
Bearing in mind this Mac mini has half the Ram capacity, albeit much faster Ram.

I have a fair few things set to start-up with my Mac, including, Dropbox, Wacom tablet drives, 1Password, Pastebot, Safari, Mail, and a few other utilities - the basic set of things I need to run my machine how I want and essential apps I want open all the time. For the iMac to boot up and get all this running so the CPU goes back to idle took about 15 minutes. From a cold start, the M1 Mac mini does it in under 15 seconds.

Again, this isn’t all CPU-bound, the disk speed will play a large part in this. I ran a Black Magic disk speed test on both machines and the M1 Mac mini writes at 35x the speed and reads at 18x the speed of the old fusion drive in my iMac. This is the greatest performance difference between these two machines and is going to be a massive factor in how fast it feels at completing so many tasks.

Simple actions like fetching mail or opening apps are instant. When Sketch auto-saved I would be frozen out of making user actions before, now it’s not even noticeable. Everything just flows as it should - unnoticeably fast.

The OS
The iMac was simply not capable of running macOS Big Sur, but it could have taken Catalina. I had however avoided that upgrade as I knew the additional privacy steps they had taken might cause me some issues, along with the lack of 32bit support. So I put off that upgrade for a year to let developers catch up and for enough of the inconveniences to work themselves out.

Additionally being an ARM processor means all developers must update their apps to be optimised for these new Macs. Apple has written a translation layer called Rosetta 2 (the original was to translate Power-Pc to Intel 20 years ago) that is almost flawless in its ability to run X86 in emulation - there’s apparently only around a 10% performance penalty, which is unnoticeable on a machine this powerful. However, nearly every app I use has already been updated.

We’re still waiting on Adobe, but I do not use their software very often, and translated through Rosetta they work just fine. There were a few audio utilities I used to rely on more when I did frequent recordings from Rogue Amoeba that the developers are still working on, and there are betas of their new M1 optimised audio engine available, but I don’t need these apps for my workflow today.

I like the design changes to the OS too. It feels like there’s still some settling into this new design language to do in subsequent generations, but I think overall it’s a big improvement and a refreshing change.

Jumping into Big Sur today is fine for me, and should be for any designer. The only other service I used that has yet to be updated to work in Big Sur (rather the version of Safari in Big Sur) is Google meet. For this, I can suffer the indignity of launching Chrome for those calls just fine.

In addition, I can now run iOS apps on my desktop, which is a novelty. The only app I have found to actually be useful so far is Overcast for my podcasts. But to be fair, I’ve not played too much with others, and many developers have actively excluded their apps from being able to run on the Mac.

One thing I’ve always loved about the laptops is Touch ID. Having biometric authentication on a computer greatly speeds up every authentication action you need to make. With Big Sur, you can now do any authentication action with your Apple Watch, which works really well. It’s at least as fast, if not occasionally faster than reaching for a Touch ID sensor, and this works with 1Password too, which is a massive timesaver, and actually encourages me to increase the security of my password there, as I now need to type it less often. The watch simply taps you twice to let you know, as you’re expecting it you can start to move your arms into position in anticipation. I often do it through my clothes in a Wakanda-like pose, which his strangely satisfying.

In summary, I’m super happy with this new Mac. It’s perfect for my needs, and I’m glad I didn’t wait another 6-12 months for the more powerful Macs that are coming, as this satisfies my needs for the next 3-5 years perfectly.

A few pictures of my new setup. I’m still using my Varidesk to stand while I work, and will eventually invest in a dedicated standing desk unit I integrate into the office when I redecorate the room. I am also going to try a VESA arm for the monitor rather than the box my iMac has been sitting on the past few years to get the height I need. But for now, I am really loving this new setup.

Mounted under the Varidesk (mount), with USB 3 Hub for peripherals 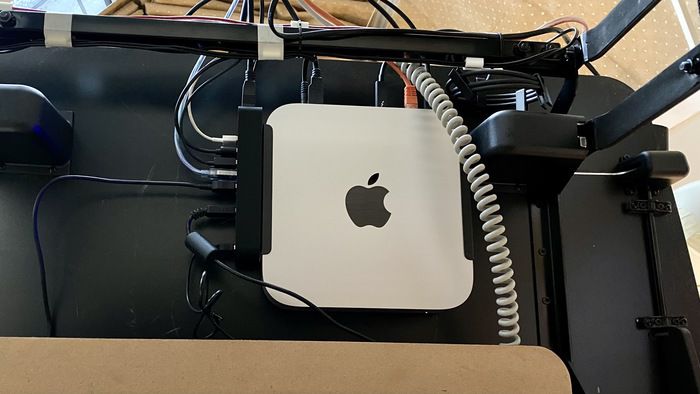 Standing desk position. I use this light for the keyboard in the winter as the room lighting isn’t that great, and my 30-year-old keyboard has no backlighting. 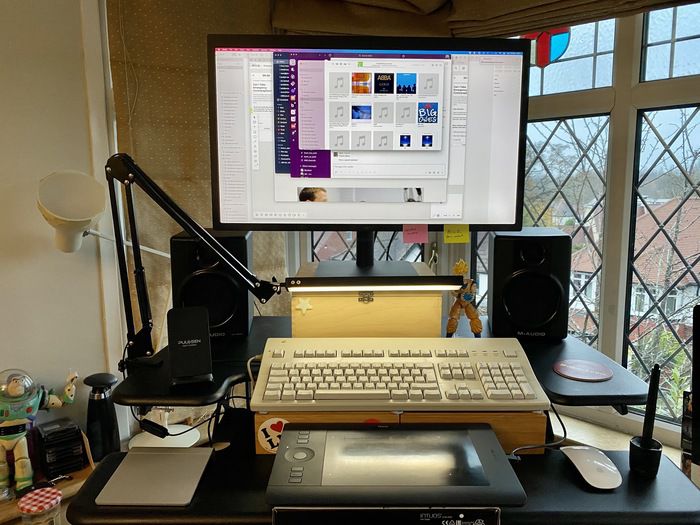 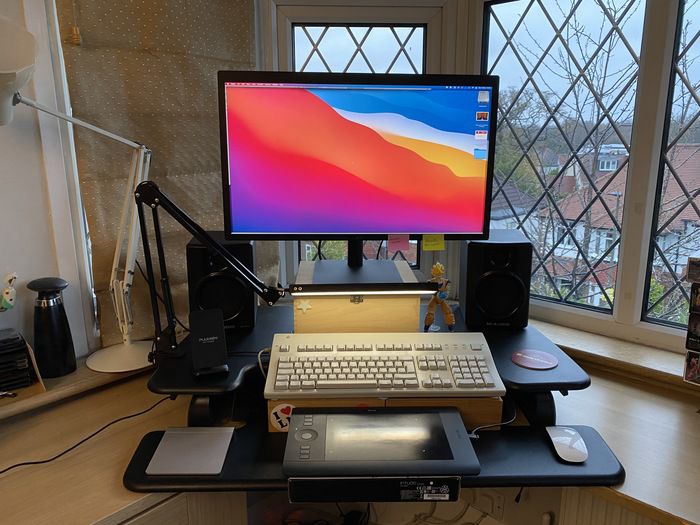 View from behind. Cable management. 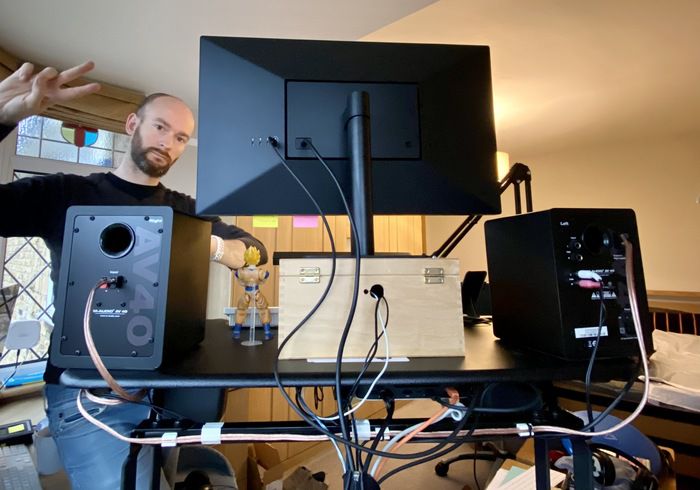 Update
I’ve since invested in a new, proper standing desk, and took the opportunity to tidy things up. Very pleased!

Rather pleased with my new desk and WFH setup. Invested in a new standing @fully_us desk and stuck everything underneath it. Clean! pic.twitter.com/55CWr331YI

Why I can’t switch to the iPad Pro full time, yet

The new iPad pro is incredible, I want to spend a greater percentage of my working time using it. The thin bezels, face ID, the power, the screen, keyboard and pencil - all amazing. I’ve always been an iPad lover. I had (and still have,... Continue →