I am super interested in new features, UX and Design changes to the operating systems I use every day, and so it’s becoming somewhat of a tradition for me to share my WWDC impressions.

I think the majority of the Apple community weren’t expecting much due to the effects of Covid-19 this year, but we got a fair amount of exciting features, and I’d like to discuss my highlights here.

iOS
Widgets are the big storey here. The home screen has remained largely unchanged (except for folders) since the launch of the iPhone. With iOS 14 we can now add widgets of varying sizes into springboard, intermixed amongst our apps. The widget is in-effect a rich version of the app icon itself. They are kind of like watch complications - displays of data without any interactivity other than to launch the connected app, larger widgets can have multiple deep links. It appears as if they can be 4, 6, 8 or 12 app icons in size. They can also be stacked allowing you to swipe through several piled on top of each other that the system can use machine learning to automatically cycle between based on usage and time of day. I use the existing widget for Weather Line, and conveniently have a big blank space of 8 icons at the top of my home screen to keep my apps within reach (thanks to _davidsmith blank icon hack), which I can imagine now filling with this weather widget. I also use the shortcuts widget to almost exclusively run the shortcuts I use regularly. So having this more accessible will be very handy, and could potentially replace my entire 1st home screen… 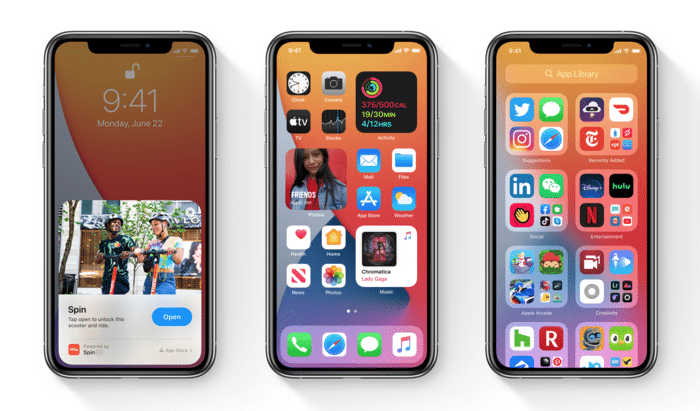 You can now also hide home screens and get access to an app library that categorises your apps into types, or allow you to search a complete list with ease. I have a rule - if an app is not on my home screen, I search, so I’ll be hiding all subsequent pages and using the new app library a lot I imagine.

Picture in picture video (PIP) is also coming to iPhone - something that has been available on Mac and iPad for a while. However I exclusively watch YouTube video on my iPhone, which doesn’t use the native video player (because of its ad insertion tech), and so doesn’t provide PIP. So that likely wont be coming to iPhone either, unless it is only enabled for premium accounts in the same way background audio is for the same reasons.

On-device diction will make big difference to my usage too. I use dictation a fair amount and am always frustrated with the speed. Hopefully this also speeds up queries to Siri?

Being able to set default email clients (and browser - less useful) is another win for me, as I have used 3rd party mail clients for years. Spark has been my go-to for some time now.

Messages is becoming more of a social network, incoming calls look more like notifications, and Siri no longer takes over your entire screen thanks to a new compact display. App clips look cool for parking services, and maps looks like it might be worth giving a go again with its new improvements.

Some great accessibility features are coming too, including double and triple tap detection, which (when the phone is unlocked) you can map a set of predefined actions to, including running a shortcut - which means you can set it to do pretty much anything you want. I will be using this feature A LOT. I’d think I would first like to try a double tap to resume Overcast playback, and triple tap to open the camera.

Shortcuts
I am a fairly regular user of shortcuts and I feel some of the current limitations hold me back from using it more. So I’m happy to see a few important new features coming in iOS 14 that will make my life a lot easier.

A slide from the shortcuts WWDC session

iPad OS
I am a massive iPad advocate and user. I’d do all my work all day if possible on an iPad, and I use mine as my home personal computer. Last year Apple forked iOS into iPad OS - a clear statement that this OS stood on its own, so I was a little disappointed in the number of specific features it received this year. We did however just get full cursor support and the magic keyboard case in the Spring, which I have been wanting desperately of some time and have done more to increase my iPad usage than almost any change in the past, so I cannot complain. In fact I prefer the drip-feeding major features like this in point releases throughout the year to getting all were gonna get in one big annual feature fest.

The two big things were pencil upgrades and alignment with MacOS app layout.

The pencil and pencilKit drawing gained the ability to natively draw and tidy up shapes, boxes and arrows, scratch to erase, better object selection and manipulation, and Scribble (proper handwriting recognition).

Hand written notes were indexable previously, but now all text is selectable, and you can even use the pencil to fill in forms online with hand writing that converts into typed text. The demo looked impressive and I cannot wait to see how well my terrible handwriting translates. Both these features are sure to increase my use of the pencil on iPad, which has dropped significantly since getting the trackpad in the Magic keyboard case. 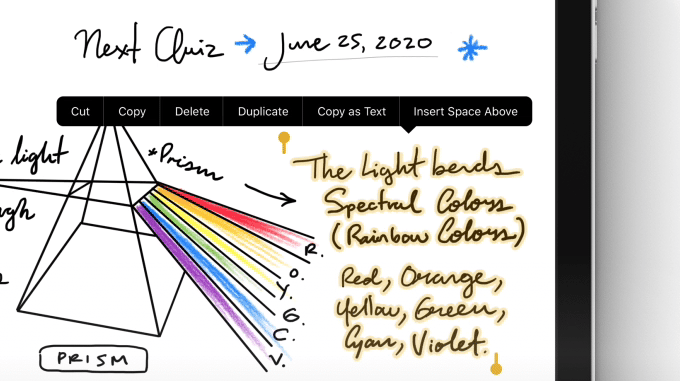 App layouts now better support side bars, menus and form fields like dropdown and date selectors in a way that feel more desktoppy. Even the iPhone is getting these changes, which seem replace UI like the old tumblers with more traditional web-like calendar selection tools, and options menus that drop down from the UI you tap ratter than in an action sheet at the bottom of the screen.

All very good, but for the most part - this past year I’ve been rocking a face with the date and a weather complication only, and have been loving the simplicity.

Native sleep tracking is also coming to Apple Watch. I already do this by using a second watch to wear at night and let third parties track the HealthKit data to log sleep patterns. However natively supported sleep recording will obviously be a lot better, and the additional features around do-not-disturb and wind-down modes are very welcome officially supported features to a series of hacks I use to achieve something similar today. I’m looking forward to seeing what this new sleep data looks like, and also what great analytics can be provided by Apple and third parties.

MacOS
Turn it up to 11! OSX is no more and the transition marks the beginning of a move to Apple Silicon - the biggest news announced which I’ll cover separately below.

The new version of MacOS comes with the largest design rethink since 10.0 (which itself was the start of a major transition from PowerPC to Intel). The whole OS has been redesigned to be more open, cleaner, using space, layering, softness and transparency to define boundaries and depth in a windowed operating system environment. Sidebars are being enforced more heavily in a way that looks a lot like those on the new iPad OS - unifying the two somewhat. SF symbols got some large updates bringing a unified iconography style. MacOS also gets widgets back, a new notification centre, and a new control centre (like iOS).

I can’t wait for them to publish design system documentation showing how they defined everything and why. It’s one of those updates, like iOS 7, that immediately make the previous versions feel dated.

Apple Silicon
The biggest news of the day was Apples announcement that they are going to transition away from Intels chips and x86 architecture all together, moving over to their own brand of ARM SOCs. This is the biggest thing to happen to the Mac in 20 years and its very exciting to me for a couple of reasons…

Ultimately ARM chips will allow them to run faster with less power (and therefore heat). Intel have struggled to get performance from chips in recent years without massive cooling requirements, which Apple doesn’t like as it places very tight restrictions on device design. You can’t get desktop performance from a laptop because the fans are tiny and no one wants a huge laptop that screams at you constantly while using it. Same applies for any computer really. Modern gaming PCs are huge and the power and cooling requirements are enormous. In addition Apple has had to take over things Intel simply couldn’t provide, like dedicated hardware video decoding and disk controllers to their own silicon they’re already putting in Macs - currently the T2 chip.

Apple have been killing it with their silicon design on iOS for a decade. They’re years ahead of the competition and are experts from rolling their own for so long now. These are not just processors, they are full systems on a chip (SOC) containing dedicated machine learning cores, asymmetric core design for low and high power demands, integrated GPU, memory controllers and much much more. 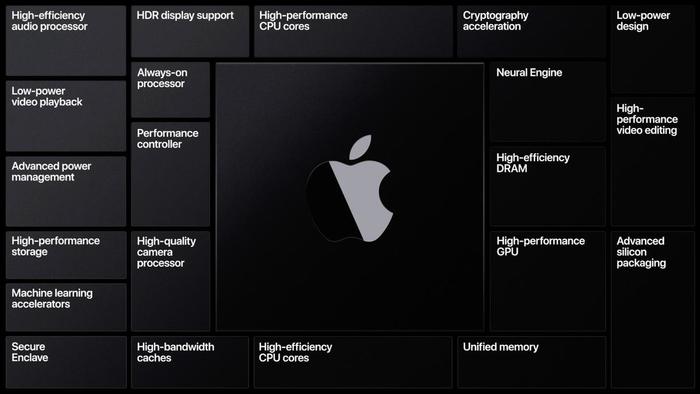 Apples existing chips run on a few watts and require no fan, and still beat most of Intel silicon in single threaded performance. I’m looking forward to seeing what Apples silicon team can do when you take off the handcuffs of iOS device power and heat envelopes possible in larger machines with bigger batteries and mains power. I have a feeling they’re going to blow everything else out of the water.

It’s a strange time as Apple are already building at 7nm so the process shrink efficiencies ahead are limited, but there’s an awful lot of innovation in the SOC architecture as a whole we’ve never seen in desktop class computing before that opens many worlds of possibilities.

There’s also the possibility for Apple to make the worlds most powerful GPUs, that are integrated into the SOC. There’s the possibility for the entire PC gaming pivot almost entirely to the Mac, as unlikely as that is in practice I’d love to see better gaming support in the Macs future.

All apps will require optimisations and recompiling to work on the new architecture and both binaries are available on download. Everything else will run in simulation while their many-year transition unfolds. New Macs will be available later this year apparently, and they suggested a complete Mac hardware transition will take two years - which does sound a little optimistic. My home Mac is reaching the end of its productive life, and I was intending to go iPad-only for a while. Maybe I’ll consider one of these new Macs in a year or two.

Just as impressive is that all iOS apps will run natively on MacOS 11 on Apple Silicon. In theory the Mac just got a million times more apps. Some may require minor modifications, and there’s still Catalyst to extend the usability of apps on MacOS. Usual storey here too: the more native your app, the more functionality will work better, including full windows resizing and dynamic layout adjustment with well built universal iOS applications.

It’s all very exciting, and still a long way off being a reality for the majority of Mac users, but there’s a lot to be excited about here and Apple will once again have the opportunity to redefine an entire industry in a way only Apple seem to be able to do. I think they’re going to push the entire industry along at break neck pace, as they have with phones, and leave the competition struggling to catch up for some time.

Workouts and fitness in 2019

Last year I dedicated myself to improving my workout regime, having seen a marked improvement in my fitness in 2018. It was going to be a challenge to better my previous years efforts, but improve them I did. My headline stats for 2019... Continue →