Workouts and fitness in 2018

I find it hard to do good work if I don’t feel good. It’s hard to wake up and get a workout in every morning, but for me its harder to concentrate all day on my work if I haven’t first concentrated on my body.

Having a desk job I spent too much of my early career and university time sat at a desk. In addition I injured my back working in a warehouse in my late teens which was only aggravated by continued desk work. Getting exercise in has been the best way to keep the issues at bay, along with changing my working setup.

I first joined a gym in 2004 when work offered a discount with a local chain. Getting to the gym had always been a matter of distance for me. If it was easy to get there, I’d do it. I’ve rarely travelled far to work out. For years I only went 1-2 times a week. Once I became a freelancer it became harder as I was often not working within reach of a gym in my chain. During these months weekends were my only opportunity.

When I worked at Collective near Angel there was a Virgin Active nearby allowing me to squeeze in lunchtime workouts and step up my frequency again to a steady 3 days a week.

When I started working for myself and then founded Every Interaction with Neil, we were based in Old St for the first 4-5 years where again I had access to a gym which I visited several times a week. But running a business left me less reliably available so consistency suffered.

Things changed for the better when we bought our new house in Bromley and extended an outbuilding to create a home gym. It’s been there for the past 3 years and I made a commitment soon after to use it more. I started with a few days a week, stepping up to 5 in spring 2017. Since then the average as been 5.5 days per week (6 days a week some weeks, 5 others), which is about my continuously maintainable limit. I’ve found that when you make exercise the norm, not the exception, your body starts to complain when you don’t do exercise instead of when you do.

My weekday routine is to get up at 6:45, in the gym by 7, and workout until about 8. I need plenty of sleep to keep this up so I also work hard to ensure I get my 8 hours a night, and more at the weekends. Getting to bed by 10:30 to get up for the gym in time is non-negotiable.

I love to run, but my joints have never been able to handle excessive strain. I keep my runs under 5k generally, although I’ve started pushing that a little lately as my leg strength increases. I ran 10k for the first time in 12 years last week to prove to myself I could still do it, but my legs suffered and I needed two rest days to recover. During the week I generally run a few km a day, but time is usually the limiting factor. Longer runs can only really be done at the weekend.

Everything else is weights, multi-gym, pull-ups and mat work. There’s as many rest breaks as there are exercises, and a fair amount of stretching to finish things off. High intensity activities are generally not my thing, however I have started doing some of Clover’s HIT classes on YouTube. They’re really challenging, help me mix things up and gain strength in my legs which I’ve noticed is helping my knees in particular with cycling.

When there’s not a class on the screen, gym time is a great opportunity to watch TV shows or movies Clover won’t like. It’s my only me-only TV time.

Of course I’m tracking everything using the Apple watch, and have more or less continuous workout data since the watch was launched 5 years ago.

I’m still cycling, but only all the way to work (12 miles) when the weather, and more specifically light, is in my favour. This is good training for the annual summer tour Dave, Lewis and I still make. Since starting the new job I bought a Brompton folding bike, so throughout the winter I’m cycling to and from the station either end which tallies up to 5 miles / 8km every week day. But I’m not tracking these micro-cycles.

In 2019 I don’t intend to slow down. I have no plans to ramp things up, but they naturally tend to drift in that direction so let’s see what changes come in 2020.

My headline workouts stats for 2018 were as follows…

Walking + Running combined distance, daily average of 7.7km. Down from 2017’s 9.3km daily average - I’m running more today but walking less thanks to the Brompton on my commute. 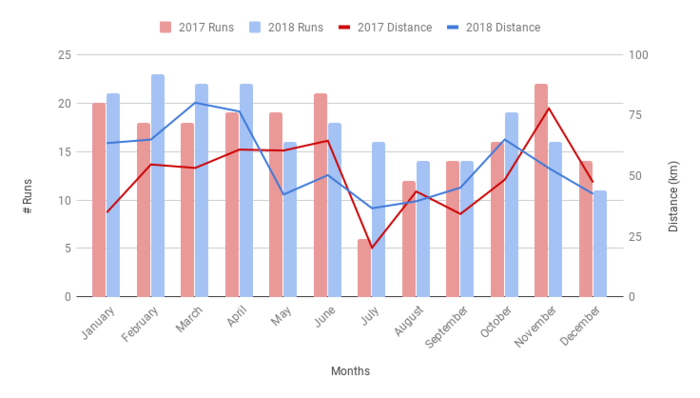 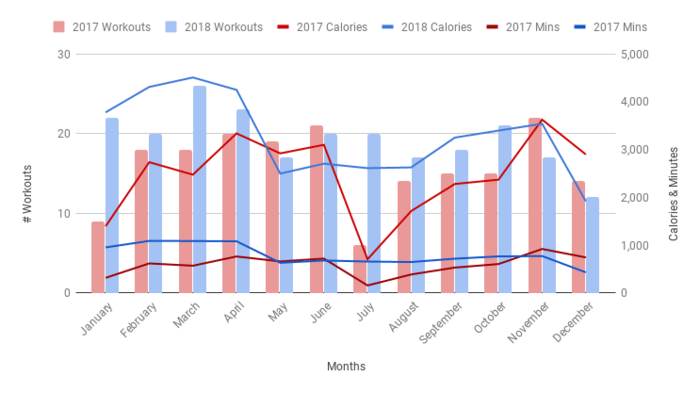 Cycling
As mentioned above I still do the annual cycle tour in August (the big spike both years below) and cycle as much as I can during the summer months as a way of commuting to work. Things changed in 2017 for me as I shut down Every Interaction, then started working from home at the beginning of 2018, then moved to MyBuilder in April. I bought a Brompton folding bike in the summer of 2018 that I used to commute via train once I stopped cycling the whole way (9.5km a day of cycling to and from the stations either end). I didn’t track everything, so am missing a lot of data, but a my best guess below at my 2017-2018 comparison of cycling. 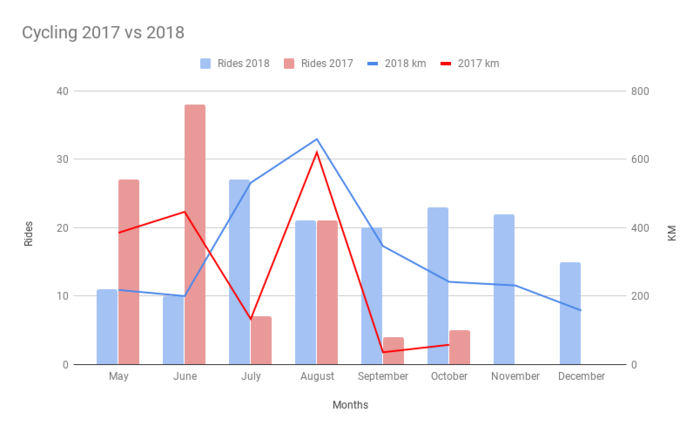 All workouts
When combining all workout activities I tracked, 2018 saw a 30% increase in total calories spent, compared to 2017. 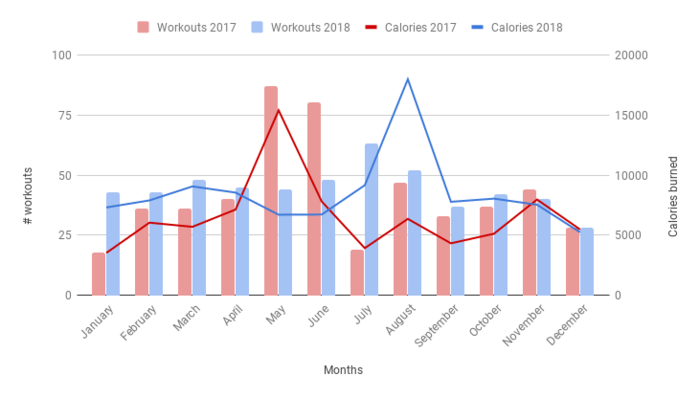 How well does Minecraft 1.19 run on an M2 Mac? It is worth using Optifine?

I love to play Minecraft on a Mac. Yes, I’m one of those people and I’ve tested Minecraft and the way it behaves on Macs quite a lot over the years and that’s what I’m going to do today with a combination of the M1s and the M2s to see... Continue →