How well does Minecraft run on an M1 Max?

I love to play Minecraft on Macs. I previously posted videos on the performance of Minecraft on the M1 chips for both vanilla and Optifine.

The M1 Max is available in a number of configurations. The one I have to test is a maxed-out Max. It has the 10 Core CPU, 64gb of unified memory, but most importantly for these tests it has the 32 core GPU. I also still have the M1 (nothing) which I also retested under the same conditions for comparison.

These chips are in a variety of machines, but whether you’re running it on a Macbook Pro or a Mac studio, the results should be identical. What affects your performance the most in Minecraft is the resolution you play at, and the graphics settings you choose in game.

I tested a number of resolutions (1080, 2k, and 4k), and also both in vanilla and then with Optifine, all in a number of different scenarios to give you realistic expectations of what it’s actually like to play Minecraft on these Macs - because I actually do play Minecraft, a lot, on a Mac.

All settings used were the defaults - that is to say, everything is on maximum settings. Render distance and simulation distance are both at 12 chunks.

I only tested vanilla Minecraft and Optifine here. I have done lots of tests with fabric, sodium, lithium, and even the MulitMC ARM native hack - I’ve tried them all. In my experience, these are all better than vanilla, but on Macs at least, Optifine always performs the best in my testing by some margin, and it’s also the simplest to get working.

Now, the performance of Minecraft doesn’t just depend on the settings, it also depends on what is in your world, so I am testing a few scenarios to give you a good spectrum of expected performance.

I started all tests with a completely new world generated from scratch using a random seed. All that exists in this world is the landscape and entities that generate at spawn - this is your best-case scenario, but it’s not a realistic one, because no world stays like this for very long. If you really play Minecraft you mine, you build, you make farms, and collect villagers for trading. All these things being loaded affect your game’s performance.

And so I also performed these tests in my main single player let’s play world that I’ve been playing in for about a year. This world is a machine killer - mostly because I used this world as a training ground to learn and grow as a player, and as such, I have hundreds of villagers, animals, farms of various types, and a lagtastic auto-storage system all in one area. It gives us a good example of a worst-case scenario when it comes to world performance.

I am also tested in my SMP server - NeueCraft where I’ve been careful not to put too many lag machines in one place, but it’s a space where others build and we have drastically transformed the world. I’m sure many of you play on servers so this is a common scenario. It’s not as laggy as my single player world, but being a server brings performance penalties so on average it performed about the same - so I’ll be presenting these two scenarios as a single result in my findings.

So let’s start with vanilla Minecraft - as it comes straight from Mojang. These tests are performed in April 2022 so I’m using 1.18.2. All FPS numbers shown are the average experienced while moving about the world - FPS obviously fluctuates depending on what is being rendered so I was seeing both lower and higher numbers at times. 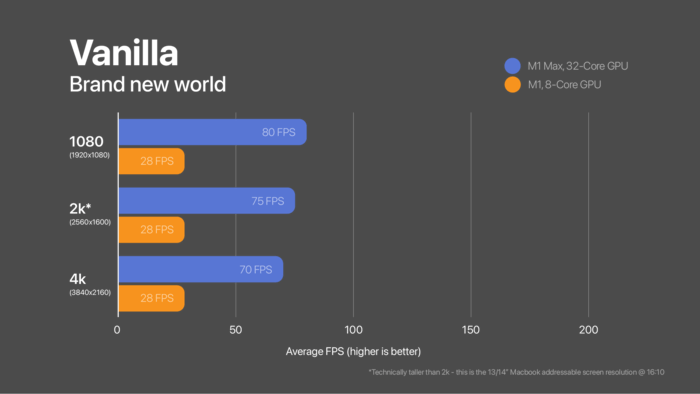 Now moving onto either a heavily populated single player world or a well-populated server. 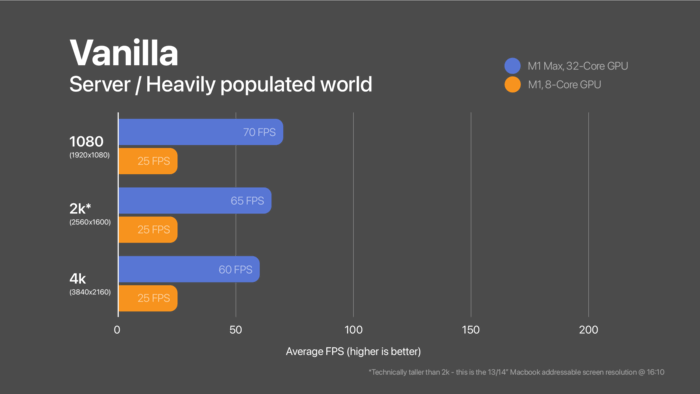 Now, these numbers are still really good, especially considering the vast majority of people have monitors that can only deliver 60hz, for those users anything over 60fps can’t be displayed, and to be honest your average gamer playing Minecraft won’t really notice much above 60 even if they do have higher refresh rates screens. So these numbers are all great!

So that’s vanilla, which as a reminder is not optimised for ARM architecture. Minecraft and Java are running through Rosetta - an x86 translation layer that has an additional overhead.

So let’s move on to Optifine.
In a single player world 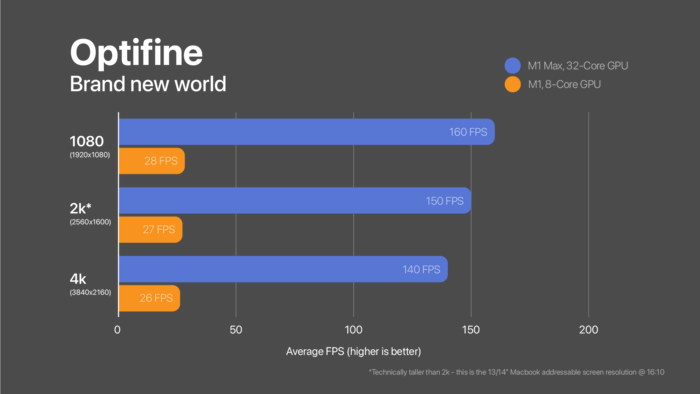 I don’t know how Optifine is able to benefit so much from the additional core count here, but I love it. You have so much headroom to play with and nothing you throw at the game seems to be able to really slow it down. It’s really impressive.

Moving onto a heavily populated world or server 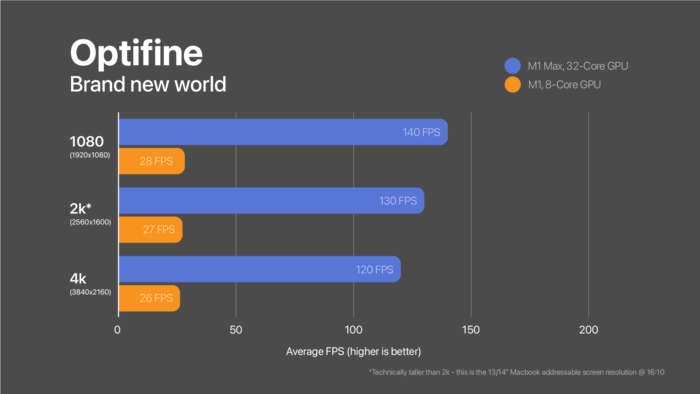 Similar results across the board again, seeing approx a 12% reduction in performance from a fresh, empty world.

If you are playing Minecraft on an M1 Pro, Max or even Ultra, I cannot recommend running Optifine enough. It seems to be able to really utilise the increase in cores and put them to work to deliver incredible performance. All while still running in Rosetta.

Optifine gives you a 5.5x performance boost on the Max compared to the M1 nothing. 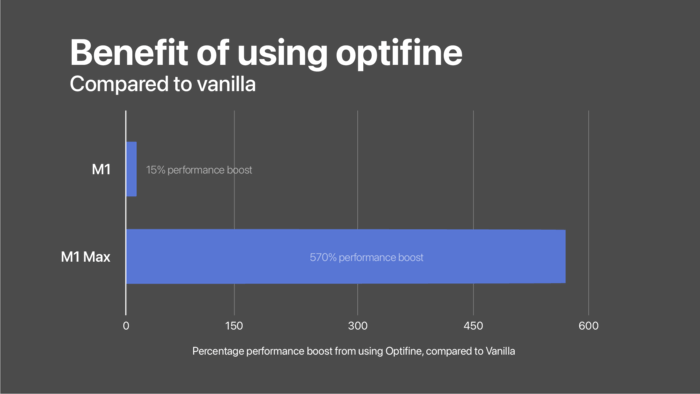 I have run similar tests using the MultiMC ARM hack, but you can only run vanilla using that, no Optifine, and I was seeing performance only around 60% of these Optifine numbers. Those native numbers were however 3x that of vanilla running in Rosetta, so in theory, if we got Minecraft and Optifine running natively, could we see x3 these Optifine numbers? Over 500fps? I can’t wait to find out.

If you want to see me play Minecraft on my Mac, I currently have over 70 episodes of my single player lets play series and we’re up to episode 12 of my SMP Neuecraft so far - we’re having a good time over there, and need more people checking out what we’re up to, so please subscribe and check out those past videos.

* Side note here, 2k (also known as 1440) is technically 2560x1440, which is at 16:9 aspect ratio, but mac monitors are typically 16:10, and seeing as most people play on their MacBook and the 13/14” MacBooks screens are the most popular, I’m using the addressable resolution on those screens which is 2560x1600 - in my testing there is no difference in performance between these two resolutions) ⤴️

Using my Mac on my iPad with Luna Display

I recently wrote about what my iPad is missing to allow me to use it as a near-full time computer for my work. Luna display is something that is helping me bridge the gap. Luna display is a tiny dongle (in USB-C or mini display port... Continue →