I never thought it was a very good idea to put smart home smarts in a consumable item. Philips Hue bulbs are a nice low-bar entry into smart lighting, but it’s not scalable, and when that bulb eventually dies you’re throwing away circuits and radios that aren’t present in dumb bulbs. It’s wasteful.

When I first started experimenting with smart home tech I’d only recently replaced the majority of my home bulbs with LEDs. I also did the math to replace just the 30-something down-lighters which came in at thousands of pounds of investment in Philips Hue bulbs. I needed a different solution.

I thought it made more sense to put the smarts in the more permanent light switch.

My research into smart light switches led me first to an American company called Lutron. After purchasing a test switch I quickly realised the US in-wall housing is dramatically different and to install these would involve chasing into the walls to fit the tall rectangular US standard. The thought of doing this throughout my home put me off. I did wire it up though and was pleased to discover it handled the voltage differences well.

Then I found a UK company called Lightwave. Their designs were not as polished but I liked their approach to making products. They were also a UK based company so there would be no conflicting standards. Homekit was still not great at the time and compatible hardware was thin on the ground, especially outside the US. At the time Lightwave only worked with Alexa, which I was fine with having just purchased a Dot on a recent Prime day. I bought a single switch to test and was pleased with the results. I quickly wired up the rest of the ground floor and was happy with the setup for a few years.

Lightwave eventually achieved homekit compatibility and bought to market a second-generation (smart series) of switches which I have since replaced my first-gen (connect series) switches with (terrible branding!).

This review will be focused on the new smart series switches, whilst comparing them to their predecessors.

It’s as easy as changing a light switch. In most cases it’s a straight swap with no change in wiring. Depending on your home writing setup it’s possible for things to get complicated, especially with master-slave switches. Consult an electrician if you’re unsure.

Frustratingly Lightwave changed the order of the terminals in the newer generation, so I wired up several incorrectly before realising this, but read the labels and you shouldn’t go wrong.

I bought the brushed steel models (white plastic is also available). The older models sat pretty flush with the wall, which sounds nice in theory, but in practice older houses have a lot of rough edges that a thin profile switch won’t hide. The newer models come with a plastic ring mount that raise the switch off the wall slightly and help hide a multitude of sins. It still looks great in my opinion, better even, and it also allows a little extra room for the wires, so I prefer it.

The switches do require a bridge to function that uses a proprietary radio frequency, likely to help the signal pass through walls more effectively than standard WiFi. It’s not a pretty plastic box so best to hide it away. The hub requires power and ethernet into your network. Starter kits are available that contain both switches and the hub. This is simply a case of plugging in and following the setup instructions. Once the bridge is installed you connect it to homekit, which brings with it all the lights in your home. 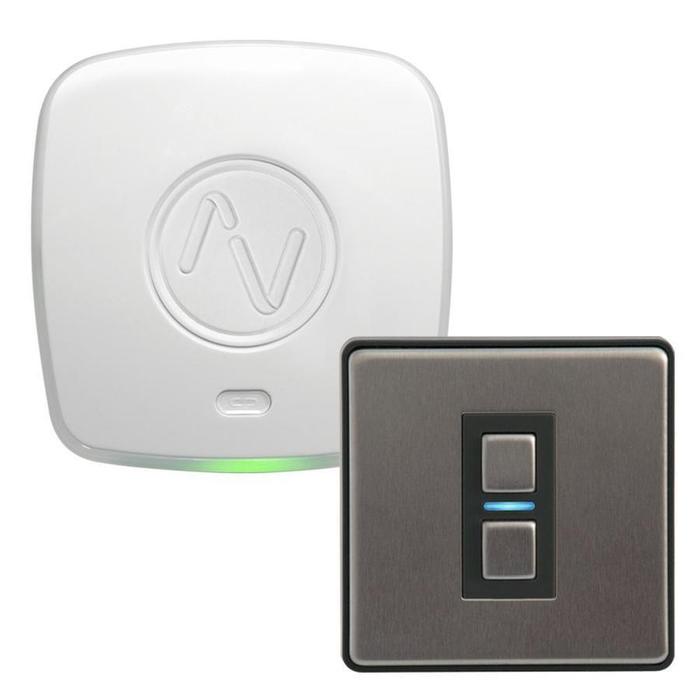 Lightwave created a second app with this generation too - there are now two in the App Store. Confusingly both apps work with both generations of switches, but I recommend using the newer app as the experience is much better and the old one seems to have been abandoned.

Neither are great apps. The UX and design are both pretty shabby, with navigation to essential areas made difficult due to unconventional UI. Still it’s possible to muddle through, and once setup you essentially never need to open the app again, as homekit, voice control and the physical controls will be your primary interface.

A firmware update was recently pushed out, but each switch must go through its own update procedure, which is tiresome. I’m of the opinion these smart devices should update themselves, and they should certainly be able to update more than one at a time when all connected to the same bridge.

Once set up, the homekit integration is pretty seamless. I’ve had no issues, and the reliability with Alexa also seems to have improved with this newer generation.

The new Smart series has a feature that allows you to adjust the driver voltage to the connected lights. I previously had issues with flickering in certain types of LED bulbs, but this feature allows you to adjust the percentage of full voltage delivered until the flickering stops. A very welcome addition as now I can buy any old bulb and be sure I can get it to work well, where as before I had to be picky with tried and tested models. It’s a terrible UX and very trial and error, but it works.

These new Smart generation switches are no easier to install, but the setup is improved with the addition of voltage regulation.

The great thing about smart switches over bulbs is the light switch works like a light switch. With a smart bulb the switch cuts power to the bulb, and the smarts; if off at the switch you can’t control the light via voice, automation or any other mechanism until you flick the switch again. Smart switches have permanent power so are always usable as a switch you use with your finger, or your voice.

The Lightwave switches have two buttons; on/up and off/down. Push once for on/off, long press for dimming up/down.

Little LEDs indicate the status of the light (on/off) and act as switch finding guidance in the dark. You can customise the colour and brightness of these lights, but you can’t turn them off, which excludes them from bedroom use for me, unless I blocked the LEDs with tape or something (yuk!).

Turning a light on returns it to the last dim level, and holding the buttons up or down adjusts the dim level. Dimming takes too long in my opinion, there’s at least a whole second delay before dimming starts, then the rate of dimming from there is slow. However once a level is set I rarely change it. The living room is where it is changed the most and a simple voice command is always much quicker.

The overall experience with this new generation is the same as before, but it’s just more reliable. It seems to be faster when making voice command too. This is probably due to homekit, however reactiveness does seem slightly better with Alexa in the smart series too. Either that or the improved reliability makes me think they’re faster to react.

In my kitchen, due to several past extensions, we have 5 light switches in 4 locations, so turning them all on manually involves a tour of the whole space. Tying them together with a single “kitchen lights” command is a massive time saver. With the previous smart series switches the lights would all come on at slightly different times. Today with the connect series, they’re much more synchronised.

As I mentioned above the design was updated slightly from the previous generation. I think it’s an improvement in nearly every way. The brushed steel faceplate is my preference and works well in my home.

I also mentioned above, the LED indicator lights cannot be turned off, which I think it’s an oversight but could be fixed with a software update. The LED indicators were present in the previous generation too, but lacked the colour and dim controls of the new connect series.

The buttons feel solid and tactile. The overall build quality is pretty great.

I don’t know why smart switches don’t just use standard dimmer controls; a knob to dim that you press to turn on/off. I assume because traditionally dim knobs have a physical start/stop point to insure the highest/lowest settings, which if could be controlled remotely would involve motors. The up/down buttons are an inferior interface, but I assume lend themselves better to the smart switch application?

Homekit integration and the possibilities of automation was my main reason for upgrading. Moving everything over to homekit seemed tidier from a smart home management perspective, and obviously more secure too. It’s great having everything in one place; the home app.

Done automation is possible in the lightwave app, but the automation controls are easier to use in Apple’s home app than any third party equivalents.

Homekit also enables me to automate the lights in conjunction with other devices. In the kitchen and hallway I have set anew automation that if we are home, after sunset, if my Logi Circle camera detects motion, turn on the lights, for 10 minutes. Instant night-time activated motion lights!

I also have the hallway light turn on when it’s dark and either of us arrives home, as well as audio security features that turn on a sequence of lights if we’re out and the outside motion detectors trigger.

A smart switch like this from lightwave will cost twice as much as a smart bulb, so you need to do the maths for your situation. Obviously, a switch should outlast a bulb, so long term its better value. If you have a room with numerous downlighters it’s a no braider; get a smart switch. If you have light fittings that not either Edison, screw or downlighters then you can’t get a smart bulb, making the switch the only choice.

I’ve seen more expensive smart switches on the market, and cheaper ones too. I think lightwave strike a decent balance between quality and price.

I’d recommend lightwave switches to almost anyone in the UK looking to install smart lighting. Exceptions being renters or small houses with a single light fitting in each room.

The new smart series is superior in almost every way to the previous generation. It’s not the kind of tech that needs to be constantly iterated upon; I can see this version being in production for 5 or more years, so anytime is a good time to buy. If you’re in the Apple ecosystem the advancements in homekit are going to give you the newest features year over year anyway.

Their weakest point of the usability of the physical dimming controls, but it’s easier to use voice anyway.

I like them a lot. They give me all the features I want from smart lighting in a tidy package. Based on my research they are the best option available in the UK.

Some time ago now we bought a One Fast Cat Wheel for our darling pussycats. They loved it since day one and enjoying showing off by jumping inside and going for a run when we are around. It wasn’t until we installed a camera in the... Continue →