Why I can’t switch to the iPad Pro full time, yet

The new iPad pro is incredible, I want to spend a greater percentage of my working time using it. The thin bezels, face ID, the power, the screen, keyboard and pencil - all amazing.

I’ve always been an iPad lover. I had (and still have, working!) an iPad 2, then an iPad Mini, and a Mini 2. These were my commuter computers for many years. Then I started buying the Plus-sized phones, which were close enough to the Mini for me to take over the role of commuter computer. I skipped the entire Air generation, and then was totally sold on the iPad Pro 12.9". I’m now on my 2nd iPad Pro with this new generation.

My phone (an iPhone X at this point) had continued to be my commuter computer, and the iPad has evolved into my new home computer. It more or less lives in the living room and it’s responsible for the vast majority of my home computing.

With the new 2018 iPads Pro I was convinced this would be the generation that allows me to start to switching my daily work from Mac to iPad. I tried really hard, but my job involves things that the iPad still cannot do. In software this is mostly my use of Sketch and some recent schema writing in JavaScript which requires plugins such as Prettier to validate, as well as being to run the app locally using Yarn and run automated tests, etc.

The software limitations I can work with though. I still have a Mac and would use it for these specific purposes. The biggest hurdle for me was desk working, specifically with external screens. I have worked very hard to reduce my mostly desk-based work impact on my health and back. I’ve been a full-time standing desk worker for many years now and find this setup, along with plenty of exercise, improves my backs condition immensely. My monitor is on an arm, the top of the screen held above eye level, standing on a balance board, and I’m using a Wacom tablet as I have for over 15 years (helps reduce wrist RSI, and is a superior input device once you adapt). To use an iPad for daily work I would need to plug it into an external display, or risk damaging my neck further by looking down at it on the desks surface. Lucky for me the 2018 iPad Pro brings with its USB-C port support for 4k monitors. Unlucky for me this only supports mirroring, and there is no cursor support. This means you have to interact with the iPad screen to navigate, and it means you can’t look at the external screen while doing so as without a cursor you can’t see what your interacting with. No external pointing device support (because no cursor) means to interact with anything other than the keyboard you need to touch the iPad screen, which means looking down at the iPad, which immediately makes an external screen a bit pointless, unless once you open an app you spend the majority of your time typing. 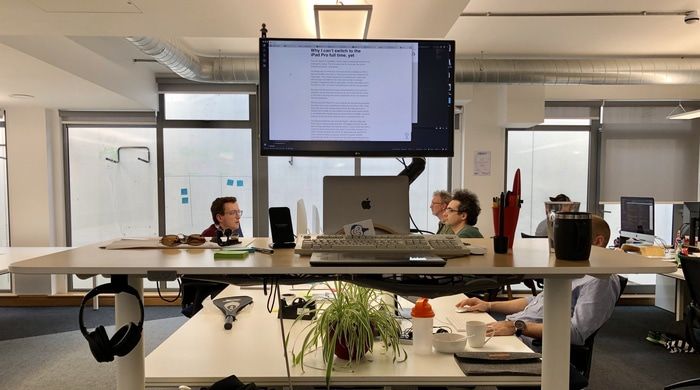 The only other option would be to support external touch screens; an acceptable if not arm-straining alternative.

If Apple were to enable cursor support, and ideally support a range of input devices, including my beloved Wacom tablets, I would be a very happy man indeed. If this were possible I could adopt the iPad for the vast majority of my workflow - I’d guess around 85%. I’d switch monitor inputs between the MacBook and iPad as required, using the same keyboard and Wacom for both (connected through the monitor hub). Using iOS for the majority of my professional workflow is a dream others have obtained and I’ve been edging towards for years. It’s closer than ever and only one small step from becoming a reality. If Apple only announced this single feature at WWDC this year I would be ecstatic.

Until then the iPad unfortunately must remain a casual home computer for me.

Using Optifine with Minecraft on an M1 Mac

I had a good reaction to my post testing vanilla Minecraft on the M1 Mac at various resolutions, and people have been asking in the comments about the performance when using Optifine. Optifine is a mod that is designed to make Minecraft... Continue →