Tracking what I drink

As I mentioned in my 2019 year in review I began tracking a few things that I drink. There were a few metrics I was interested in:

The big one was water. I wanted to ensure I was drinking enough water, as I felt I was not at the time. My first point of call in 2018 was Water Minder - a helpful little app to do just this, with healthKit integration and a watch app.

For caffeine I started with an app called RECaff, which was essentially Water Minder for caffeine.

What I found with both these apps is despite how easy they have tried to make it, the barrier of being an app made it difficult at times to remember to use them. They had watch complications that launched predictably slow apps, widgets and reminders. But I still wasn’t logging everything I drank.

The problem was that when you drink tea or coffee, you’re also drinking water, so to log a tea I had to use both apps. This raised the barrier too high and led to really inconsistent data.

Then Shortcuts launched in September 2018. With Shortcuts I was able to make my own actions that gave me a comprehensive menu of the drinks I most commonly consume and log both the water and caffeine at once with a single tap. Shortcuts ties directly into healthKit where everything is stored.

It’s only so accurate of course, I’m using average values for caffeine per tea/coffee, and the same with water content. But it would give me an idea within 85%ish accuracy, which is good enough and about all you can hope for with any type of consumption tracking.

So my stats are as follows… 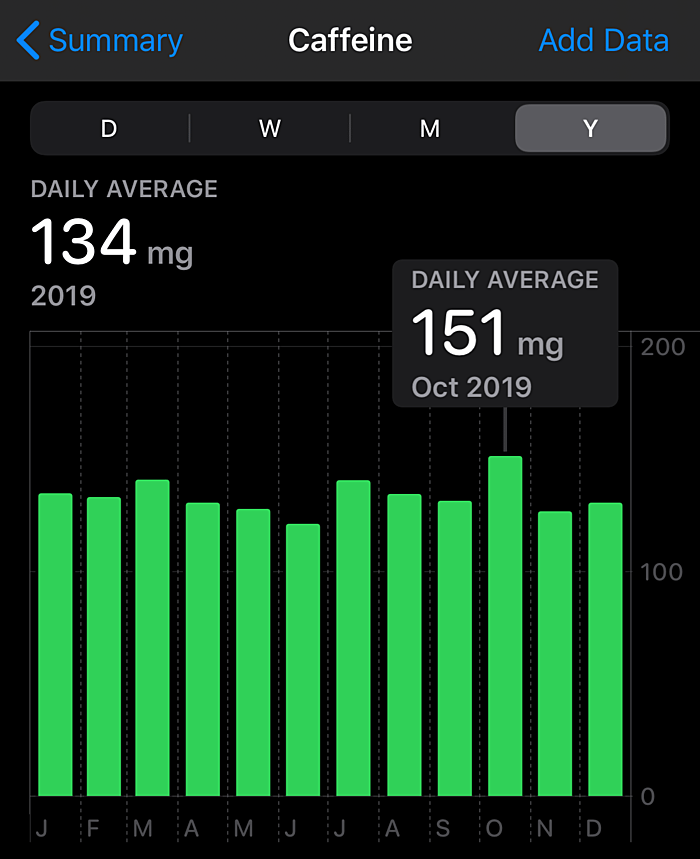 For the whole of 2019, my daily average caffeine intake is 134mg. The daily recommended limit is 400mg. 200mg for pregnant women. So I think I am well within safe limits. 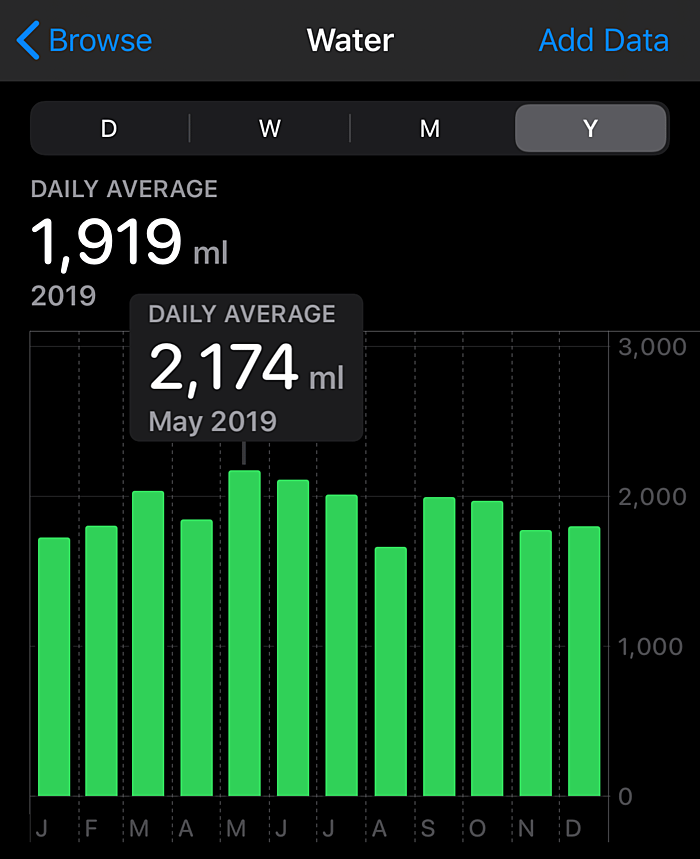 Throughout 2019 my daily water intake (in the form of drinks) was 1,919ml. Funnily enough the recommend intake is 8 glasses of water or 1,900ml. So I am about spot on here. In fact I reckon I only track about 80% of my drinks, as some inevitably get missed, which would push my actual intake to around 2.3 litres.

Obviously food consumption contains water, some foods more than others, all of which are not being tracked. But the 8 glasses recommendation is purely drinking.

Either way think I have no reason for any concern. What I found most interesting was the change in behaviour I noticed once I started tracking. I definitely drank more caffeine and less water before I started tracking. The act of tracking made me more conscious about it and have helped set in place new habits.

I am still tracking today, but for how much longer I do not know. However, I hope the habits I’ve put in place now stick after 1.5 years.

Alcohol was a different storey. Alcohol consumption can’t be tracked like water or caffeine in healthKit. You can track blood alcohol levels, but this is more for medical readings and doesn’t really apply to consumption. I’m not sure why Apple chose not to track alcohol consumption. Perhaps the reasoning is - where do you stop? How many vices do you allow people to track? It’s healthKit, not unhealthyKit afterall.

I found 1 app called Drink Less, and was made researchers at University College London who wanted to find out if tracking made people drink less. I personally didn’t find it did. I’ve seen a gradual reduction over 12 months by about a third, but I still enjoy a drink most days, and never has a week gone by, unless I was ill, where I didn’t have a few at least.

I set a goal of 20 units per week, but almost never got under it. Tracking consistently was also harder, as you do tend to forget after drinking a few too many.

There’s no where in healthKit for the data to go, so its stuck inside this app which had poor analytics. Doing my own math form the rough stats it gives me, I averaged 23.8 units per week over the course of a year. If tracking was easier and the data better, maybe I would be more affected by my tracking, but good old fashion persistence and getting older are contributing more than anything, along with my desire to be fitter.

In the past I used to drink a lot more so I know what I’m doing now is an improvement and its trending in the right direction, which is all the knowledge I need.

It’s been interesting, and very un-alarming, which when it comes to health related data, is a vey good thing. I’ll drink to that 🍻

Some time ago now we bought a One Fast Cat Wheel for our darling pussycats. They loved it since day one and enjoying showing off by jumping inside and going for a run when we are around. It wasn’t until we installed a camera in the... Continue →