Attempts to digitise my movie collection

I’ve always been a movie fan, and also a audio-visual hardware fanatic. I had a DVD player attached to my 32" Sony Triniton CRT TV in 1995 [ 1? ]. I bought a good DVD player that was chipped to make it multi-region so that I could order region-1 (North American) discs [ 2? ] and held regular movie watching sessions in my small single bedroom with my friends. It was ace. Over the years I have accumulated over 200 DVDs, and eventually bought a Blueray to play the small handful of Blueray discs I also ended up owning.

Time marches on and today in 2016 I think I have not played a DVD disc in at least 5 years, maybe more. I have put in storage both my DVD and Blueray players after several years being little more than ornaments, and my DVD collection has been sitting in boxes since my girlfriend moved in and wanted the shelf space the DVD’s were pointlessly occupying.

Five years and two house moves later we’re having a clear out and it’s decision time. I’ve been putting this off for a long time but finally got into the mindset of ‘it’s time to get rid of movies on plastic discs’. After looking around I was disheartened but not surprised to learn my collection was worth around 1% of the original investment. Being effectively worthless they shifted back in my mind to having a more personal value, and so I began sorting through them to see what movies I might want to watch again. 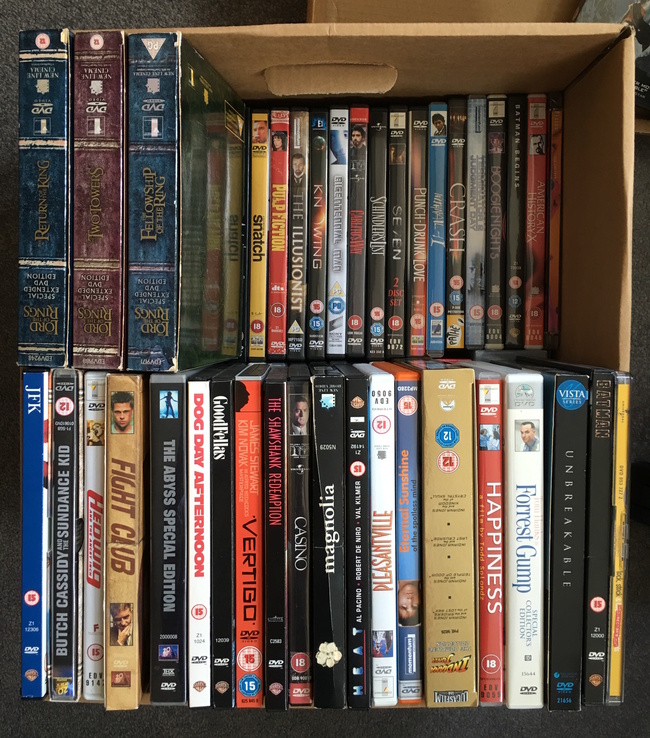 Naturally my plan was not to keep the discs, rather move them over to the Plex server on my Synology so that I can stream them via my Apple TV whenever I please. And so my first thought was to rip the DVDs to a quality level I was satisfied with then get rid of the discs once and for all.

This is where I encountered my first problem. I no longer have access to a computer in my life that has an optical drive. So I looked around and happily purchased a cheap £20 USB DVD-RW drive on Amazon. It was a piece of crap, but it worked. Next was to figure out how to use Handbrake effectively to rip the movies. I researched the application settings and started test ripping. Seven attempts later I could not get this thing to produce a video that was watchable - it always looked and sounded like it had been through a food blender.

So on to Plan B: download all the movies I own and might want to watch again. Why didn’t I think of this before? The quality isn’t always as perfect as I want, but I still only have a 720p TV (topic for another time) and as long as the sound is in 5.1 I’m going to be happy. A couple of special movies I made sure I got a higher quality version in 1080p, but only a few. My receiver and Plex/Apple TV do a fine job of upscaling anyway - upscaling today is pretty magical. My ripping tests cost me at least 8 hours of faffing, it only took 30 minutes to set the download queue going - the next day they were all downloaded and processed in Plex. So I’m happy, I can get rid of those discs and also the two players.

Now I have these movies on Plex, I’m looking at this selection of 80 movies I decided to keep [ 3? ] and am thinking to myself “do I really need to own these in any form at all?”. Surely if I have the desire to watch any of these films at any time, if they’re not on a streaming service I’m already subscribed to, then I can just as easily download them again as I just have with little effort. Why do I feel I need this security blanket of ownership? It feels so 20th Century.

My two internal justifications thus far are as follows:
One - if I wait too long, perhaps some of the less popular titles that I really like might not be available to download in a few years - what then? Worst case I can surely buy it somewhere (eg: iTunes or some equivalent), but seeing as I paid for it at least once already, the thought of paying again does make me grimace.
Two - how will I remember it? My close friends will attest that I have an appalling memory in some areas. If I am in the mood to watch something I rarely can draw to mind a specific title. I rely on browsing to jog memories that spark the flame to re-watch an older movie. Without the collection present to browse I might not ever watch many of these films again, and that would make me sad. My logical counter argument is that I should just create a list of movies that I would want to watch again that I could occasionally refer to and selectively download/buy titles after seeing them there, but this lacks the instantaneous experience of browsing my Plex library and watching the film within seconds.

And so at this junction I am ready to sell off the discs. Hard drive space is cheap and despite the new digital film collection and the many other uses my NAS has [ 4? ], it’s still only at 12% capacity and I always have the option to get larger drives or upgrade to a model with more than 2 bays.

Maybe I’ll keep these movies on Plex, maybe I won’t, but for now at least I feel like I have shed an unnecessary relic from my past and created some more space in my home. Mission accomplished ?.

[2?] The delay in the 90’s between movies being released in the USA and Europe were huge. It always depended upon the publishers and how they planned the rollout, but on occasion you could buy USA DVD’s before the movie even hit theatres in the UK. Most off the time you could order region 1 discs and be sure of having it weeks after it left the cinema in the UK. Additional benefits included different American artwork not seen here. ⤴️

2017 was a difficult year career wise. Every Interaction, the company I started with Neil so many years ago, which had supported us, our families and employees, was on the decline. Market forces meant revenue was reducing and everything... Continue →